We have been having record breaking heat in our area and it doesn't seem it is going to end anytime soon.  It's starting to feel and look like we live in Texas.  We haven't had much rain in the last two months either so everything is brown and dead here.  So we decided to take the dogs in for their summer haircuts to help them stay cool.  Newton didn't get a haircut because he already has short hair but he did get his nails trimmed.  They all seem to be much cooler now with their new summer do's.
Here is a photo with Morgan watching television.  His addiction to television seems to be getting worse.  His favorite channels to watch are Animal Planet and the History channel.  If we have guests over all I have to do is put Morgan in our bedroom and turn the tv on and he is entertained for hours! 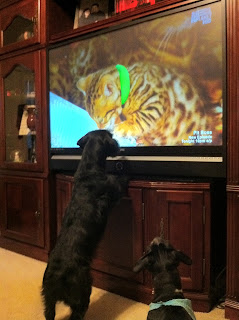