November-January
February-March
March was a very interesting month with things breaking.  I was going to go to Vegas in May with Chris since he was going to be there for conference.  But, the rule of 3 happened and I needed a new tire replaced in my new Jeep, the stove blow up and had to be replaced and the heater gave out!  So needless to say I didn't end up going to Vegas! 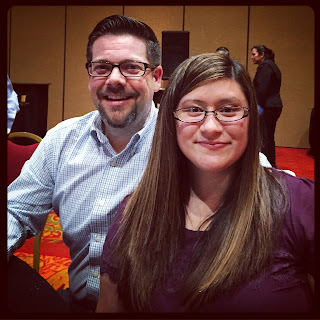 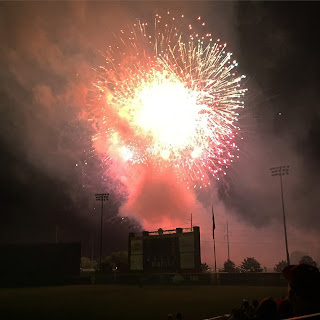 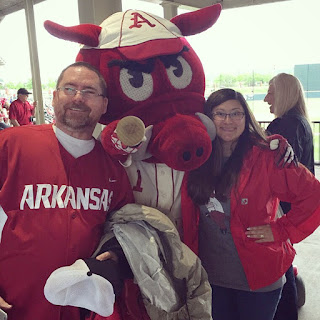 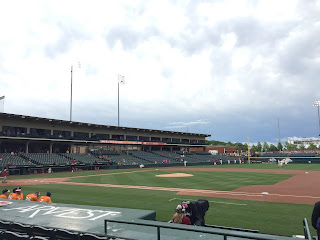 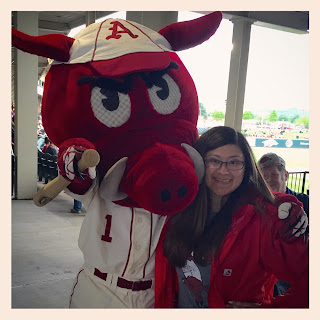 Posted by Bosch Family at 7:00 AM No comments:

You've probably been wondering why I haven't posted anything in several months.  Since Christmas my work life turned into a living hell.  My boss hated me so much that she changed my schedule 10 minutes before I left on Christmas break just to ruin my time off.  She was so hateful and mean about it that I finally decided to start looking for another job.  I devoted all of my spare time into finding a new job.  I probably applied for 80 jobs from January to April and went on close to 10 interviews.

During that time I continued to do the best job that I could.  I loved working there and I planned on staying there for a very long time.  But, my boss just kept making it harder and harder for me to stay there.  She started denying all of my vacation requests yet she would approve all of my other co-workers requests.  I would leave work most days in tears because of how she treated me. I had just about given up when I applied for a job at an area health care provider.  I wasn't sure if I would get it or not so I went ahead and told my boss that we had booked a vacation in October to Jamaica.  She denied my vacation request and said that I took excessive vacations and that she would not approve it.  I was so upset and hurt that I didn't know what to do.

Thankfully I got the job at the health care provider and everything has worked out for the best.  I love it there and I'm so thankful that I left.  It's been to nice being at a place where everyone appreciates you and having nights and weekends off is an added bonus!!  Now that I'm finally starting to settle into my new work routine I promise to post more on the blog.
Posted by Bosch Family at 7:00 AM No comments:

When I sent out invitations to our 9th annual Halloween party not a lot of people said that they could come.  So I decided this year that I wouldn't go crazy with decorating for the party and we didn't even decorate the garage.  I guess since our party fell on Halloween this year people either had to work or they took their kids trick or treating.  Normally there is always a football game the day after our party and had I realized there wasn't one this year I would have moved the dates.  But regardless of that we still had a great time with everyone that showed up.  We had to some good costumes and lots of yummy food.  Maybe next year we'll have a better turn out. 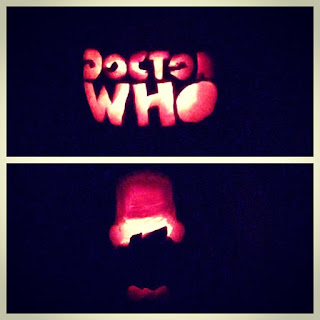 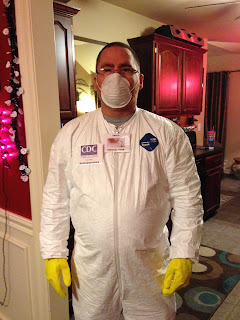 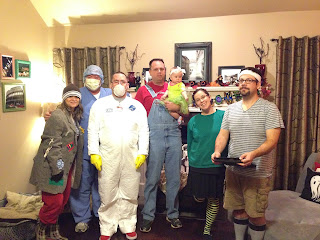 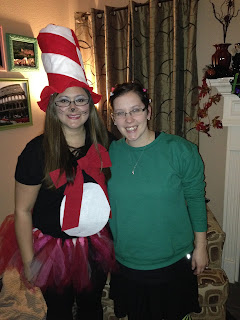 Posted by Bosch Family at 4:57 PM No comments: 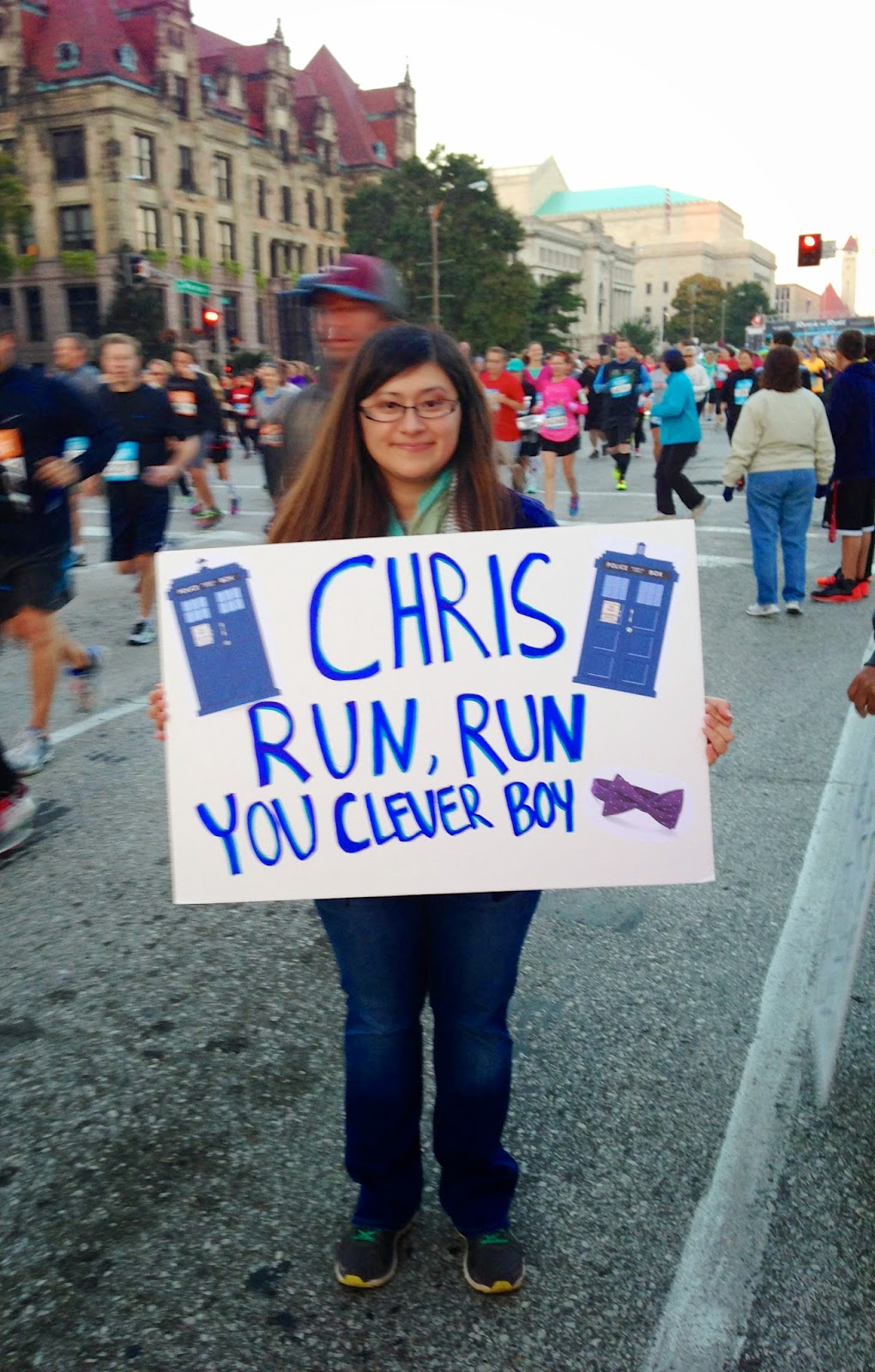 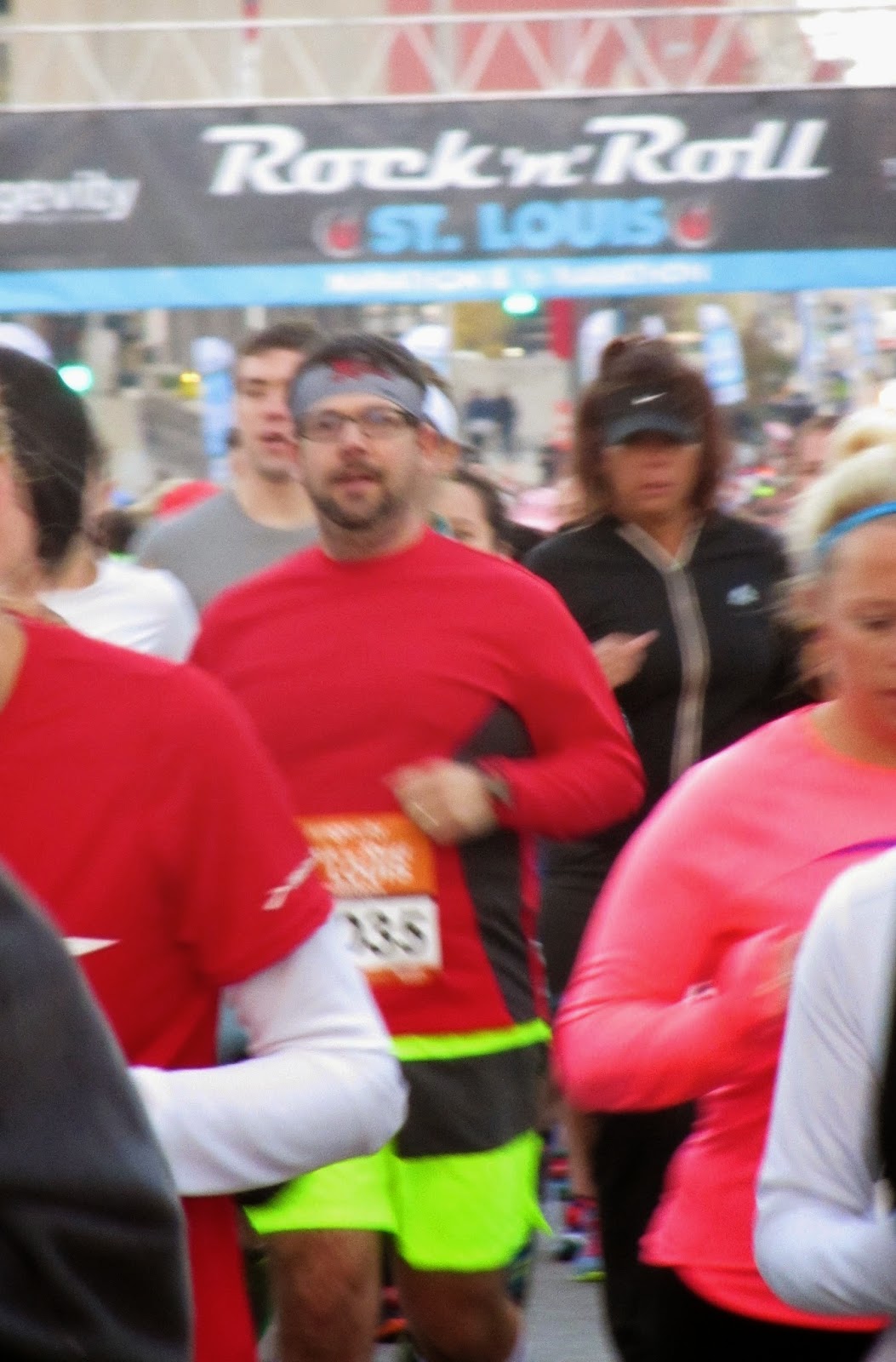 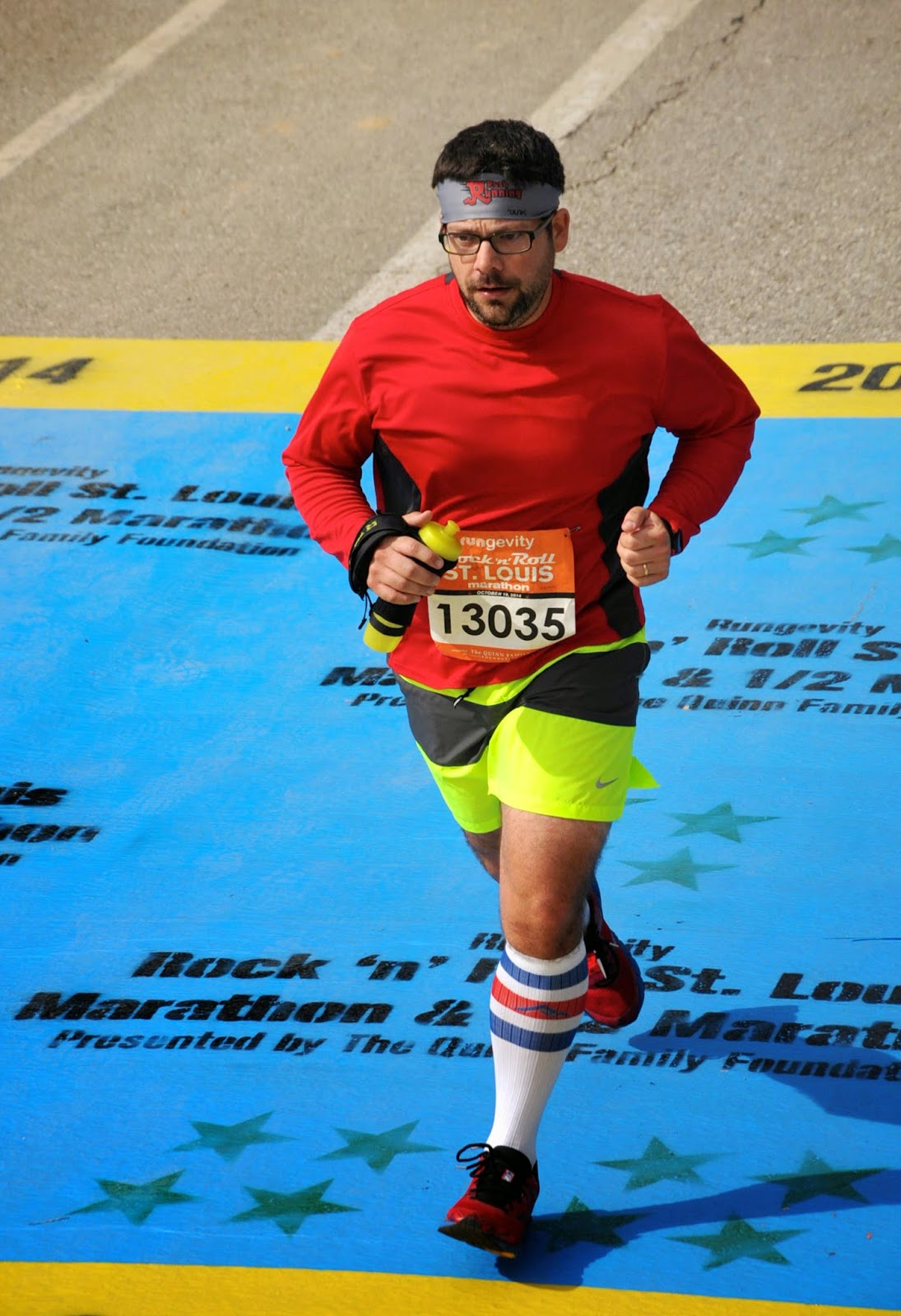 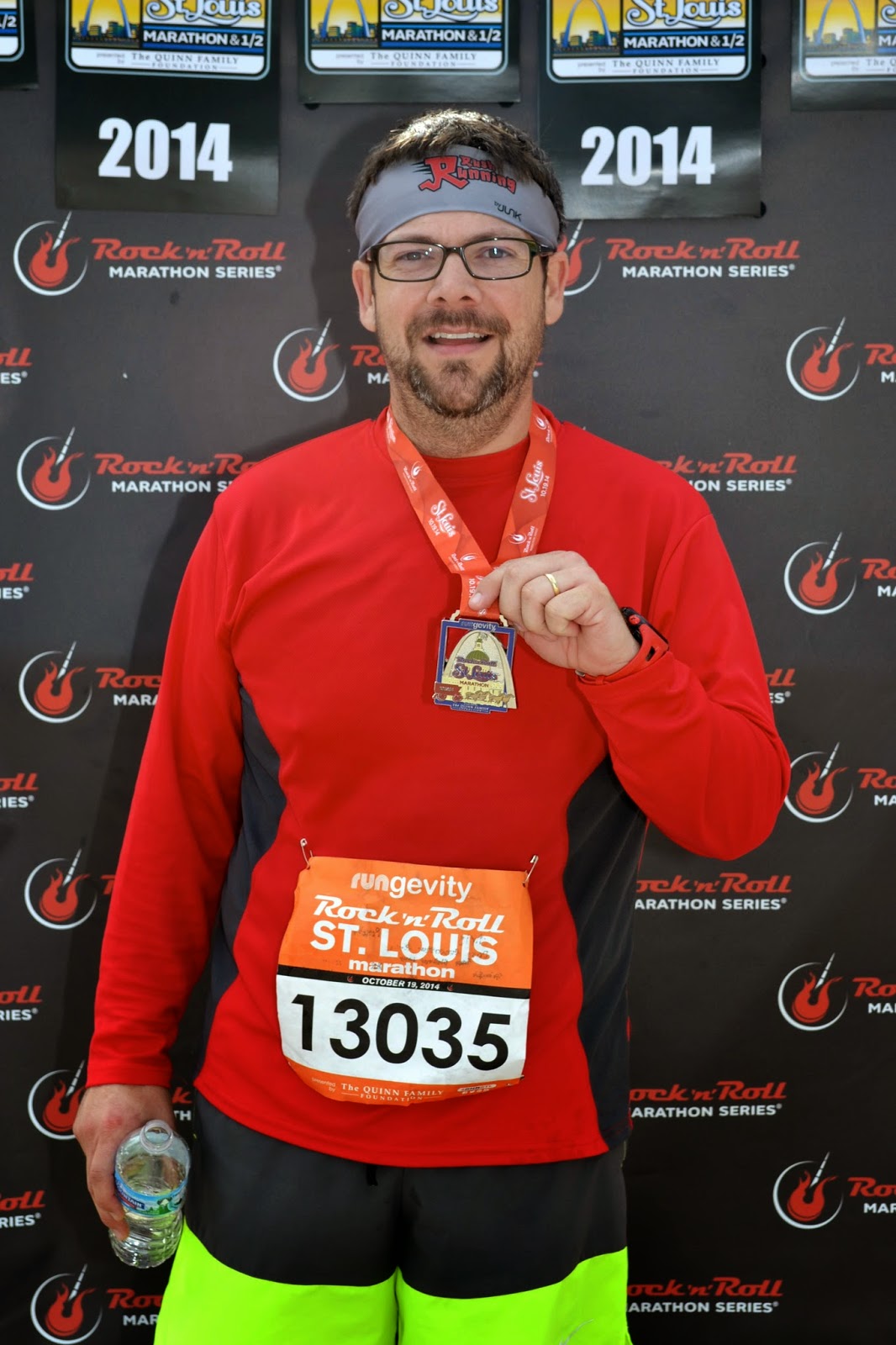 Posted by Bosch Family at 5:39 PM No comments:

Meet me in Saint Louis 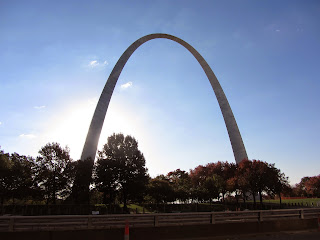 Last month we took a long weekend trip and drove to Saint Louis so Chris could run in the St. Louis Rock n Roll marathon.  Since Chris and his parents had never been before we thought we'd make it into a mini vacation.  We drove up Friday morning and hit the outlet mall right outside of Saint Louis. After spending the afternoon shopping we headed to our hotel and then went to the convention center so Chris could get checked in for the race.  When we got finished with the running expo we got some dinner and then did a little bit more shopping.  We finished the night at Schafly's brewery with drinks with Chris's coworkers.  I'm not a beer fan at all but I will say that the Pumpkin Ale was to die for!! 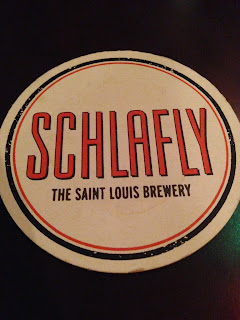 Saturday we woke up early and drove to Grant's Farm.  It is owned by Anheuser-Busch and that's where some of the Budweiser Clydesdales are stabled.  We were hoping that we'd be able to book one of the Clydesdale tours but they were all sold out.  We did get to go into the stables and see the horses and pet them.  We also took the tram around the grounds and got to sample some free beer.  When we finished with Grant's farm we drove to the Budweiser brewery to take one of the free tours of the facility.  Since we didn't pay for one of the more extensive tours, the tour that we took was really basic. After the tour we ate at restaurant across the street that used to be an old police station. 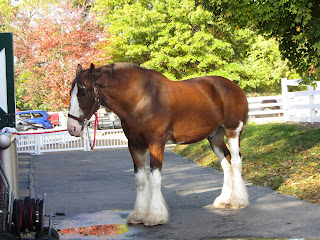 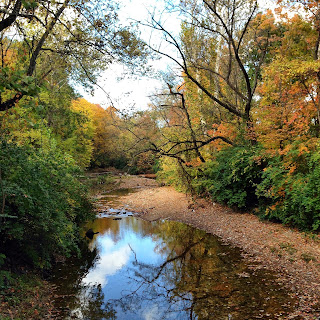 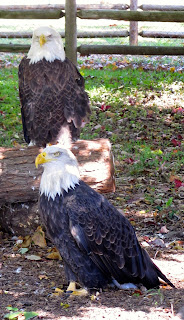 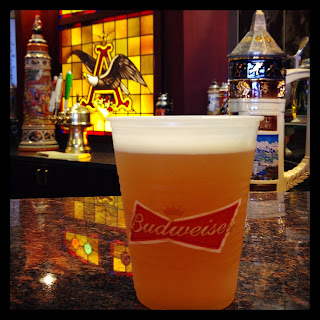 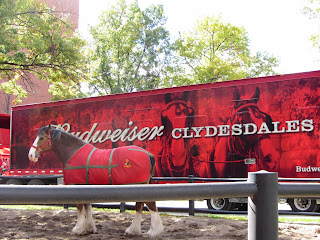 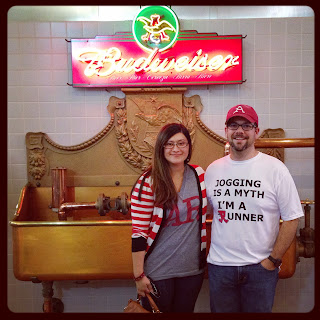 We wrapped up the afternoon with another trip to the running expo and then headed to dinner at Charlie Gitto's so everyone running the race could carb load.  I will say that if you plan on eating at Charlie Gitto's make sure and make a reservation a week before.  We had to eat at 4:45 and the owner was really rude about it.  Other than that the food and service was amazing.  Our drinks were never below full at all times.  We wrapped up the evening with a visit to a local chocolate bar.

Sunday was the race and I'm going to skip that part of the day because I'll do another blog entry about that later.  After the race we went to City Museum and I wish that we would have had more time to explore it before they closed.  We did get to go down the 10 story slide and I crawled around in some of the caves.  At one point I thought I was going to get stuck and they would have to call the fire department to get me out!! But thankfully I was able to squeeze my way out! We ended the night with eating some traditional Saint Louis style pizza and of course we had Ted Drewes frozen custard for dessert.
Monday we woke up early and checked out of our hotel and headed over to the arch.  We wanted to get there early so we'd be one of first groups up in the arch.  If you're going to be in St. Louis it's totally worth going up in the arch.  The views are gorgeous especially during fall. 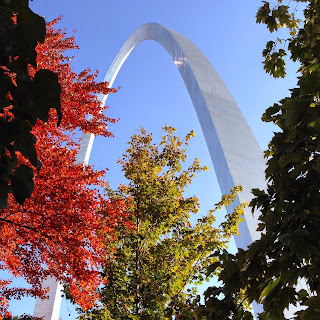 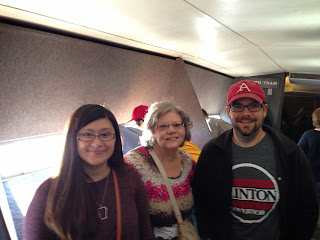 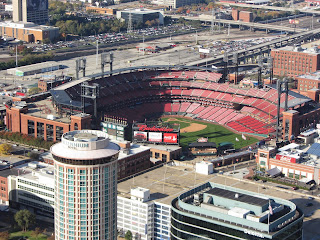 After we finished our tour of the arch we headed back to our car which was parked in the Hyatt hotel parking garage.  I was walking over a metal storm grate when the next thing I know I'm laying sprawled out on the ground!  My foot was the perfect size to fit through one of the grates.  I felt so bad because Chris had to drive home because my ankle was all busted up. It's been 3 weeks and I my ankle is still healing up. 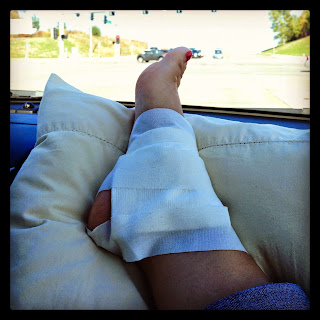 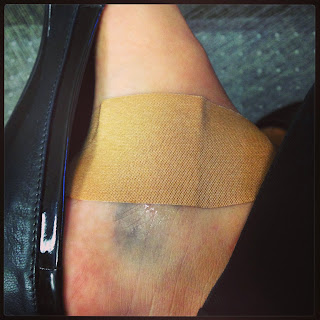 Posted by Bosch Family at 5:48 PM No comments: