This week was the one year anniversary of the ice storm where we lost power for a couple of days. I was so not looking forward to a repeat of last year any time soon. But last night we started having freezing rain that turned over into sleet. Thankfully it stopped sleeting early this morning and has been snowing ever since. We probably have about an inch of ice and about 5 inches of snow. We've had more snow this year alone than in the past couple of years. It's not suppose to stop snowing until late tonight. Thankfully my place of employment decided to close all weekend so I don't have to get out in it. It's so nice to have a snow day! 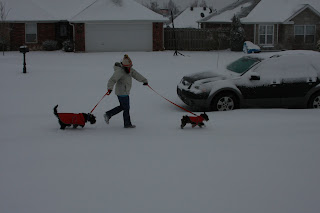 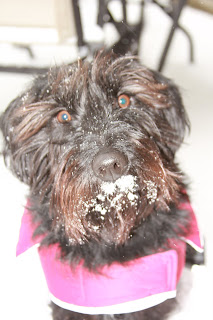 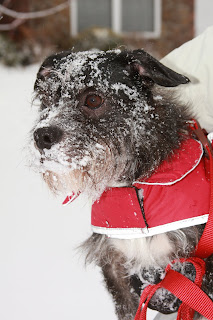 Baxter loves to eat ANYTHING and he loves it when it snows. He has his head to the ground and acts like a vacuum cleaner sucking up as much snow as possible.

Posted by Bosch Family at 6:57 PM No comments:

I have a confession to make, I am a coupon junkie. I've been seriously clipping coupons for about a year now. I really do have an obsession starting from it. I don't see why I have to pay for anything full price at the stores and I love getting things for free! I subscribe to several blogs that tell me how to save money and get things for free. There is a blog that is based out of Northwest Arkansas that is great it's called Passion for Savings. But if you don't live here there is a Frugal Map that lists all of the blogs by state to help you find the best blog to follow.

I have been organizing my coupons with an accordion filing system that someone gave me when we first got married. I love the according file system expect when they fall out and go all over the isles of Walmart or Target! After this happened twice to me, Chris suggested that I needed to come up with a better system. After doing lots of research, I decided that I would go with the coupon binder. It took me awhile to transfer all of the coupons over but I'm one happy coupon clipper! I think that my obsession might develop into an addiction!

Old System: I should have taken a before picture 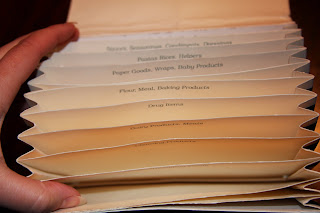 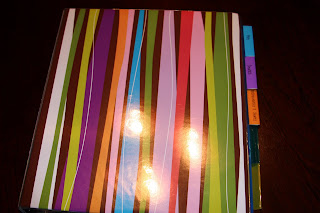 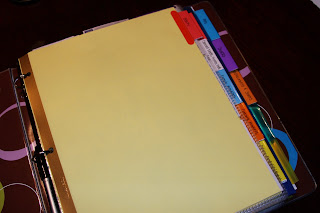 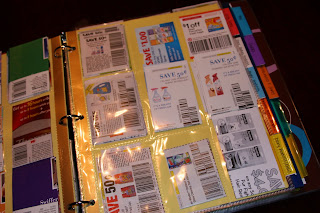 Today is National Dress Up Your Pet Day, so in honor of that I thought I'd post a couple of pictures of the dog's outfits for today. Of course they normally participate in this holiday everyday. I know that most people think that animals who wear clothes are treated horribly but clothes for dogs is great not only to provide warmth but is a great deterrent for pets that have severe skin allergies and scratch and bite nonstop like Baxter! 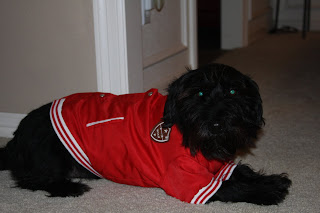 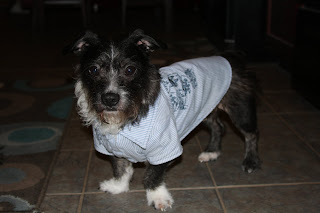 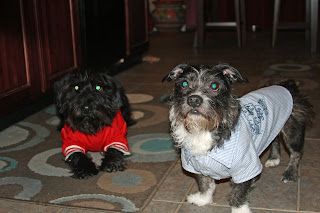 Have you ever had one of those weeks where everything seems to go wrong? Well that's how it's been for us this week! Sunday we woke up to a wonderful 2inches of snow. It seemed like the week was going to start off great but then later on that afternoon I got a phone call from my best friend's husband letting me know that she was in the hospital for kidney stones. Thankfully she is doing better but another one of our really good friends sister is not. She left to go to Atlanta because her sister had a stage 5 brain aneurysm and is still in a medical induced coma. So please keep her in your prayers!

Monday morning we woke up to more snow and I had to go take Baxter to the vet. because he was in so much pain. Back in May he was diagnosed with Intervertebral Disc Disorder and he hasn't had a major episode of it since then. When I took him in the vet. suggested that he would be a good candidate for laser disc ablation surgery at OSU. The surgery is extremely expensive but they have a 97% recovery rate. After a lot of research and debate we have decided that when Chris gets his bonus Baxter will get his surgery.

Today we woke up to more frozen stuff on the ground and thankfully my place of work decided to close today. I plan on spending the rest of the day indoors since it is so cold outside right now. Tomorrow we are only suppose to have a high of 5 and wind chills as low as -20. I'm really wishing that I lived somewhere off the beach right now. We'll be spending the rest of the day drinking plenty of hot chocolate and getting caught up on reading. Stay warm everyone! 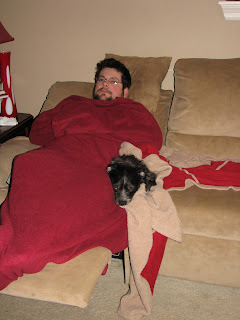 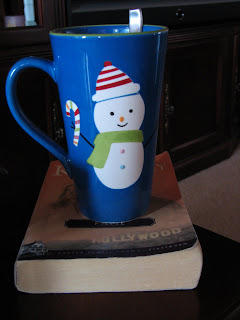 Posted by Bosch Family at 12:52 PM No comments:

We spent our New Year's Eve this year at Willy D's Dueling Piano Bar with a group of our friends. We've all gone there two years ago for New Year's Eve and had so much fun that we thought that we would do it again this year. Although this year Mayline was invited to come on stage and do the hand motions for Joy to the World. At first she didn't want to go and she actually refused to tell the guy her name, so he just referred to her as Peaches. One of the guys that we went with has the full video of the performance so when he emails it to me I will post the full video. But for now the little video and pictures that Chris took will have to do. 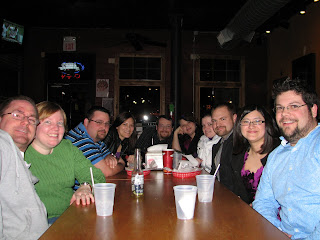 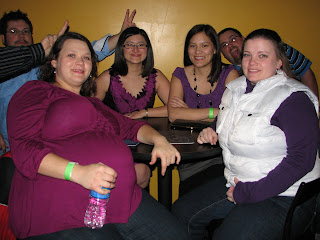 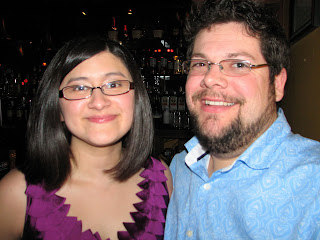 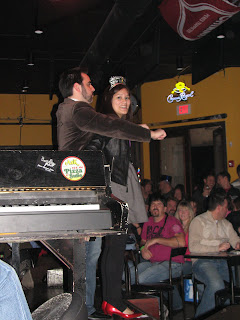 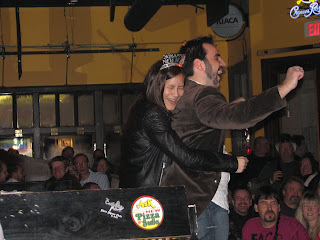 I hope that everyone is still sticking to their New Years resolutions. The only New Years resolution that we made was to get out of debt. Last year Chris and I took Financial Peace University with our church. We learned so much about debt and managing our money. If you're interested in taking this class our church is offering it again here in a couple of weeks. Just leave me a comment if you're interested and I can get you the info. It's a great class and it will change the way you look at money and your finances!

Posted by Bosch Family at 5:35 PM No comments:

It's gone to the Dogs

It's our first post of the new year and I thought I'd post some pictures of the dogs Christmas. We've been so busy the last couple of weeks that I am having to play catch up on a lot of stuff. We actually got to have a white Christmas this year, unfortunately since we had to travel that afternoon we didn't get to go outside in play in the snow. Hopefully we'll get some more snow soon so we can build a snowman! 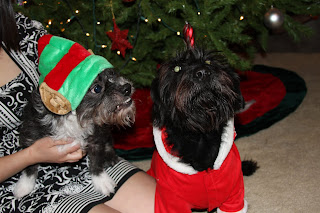 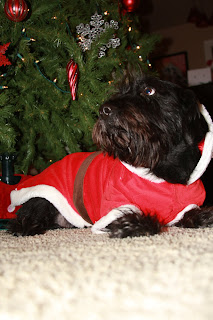 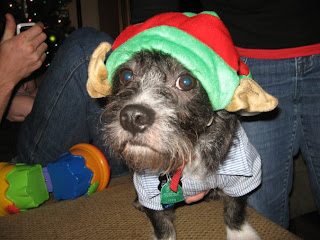 We did get to take a few pictures of our snow covered yard before we left. 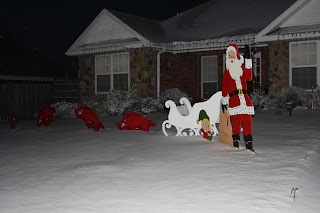 Don't feel sorry for my dogs my parent's dogs got in on the action this Christmas as well. 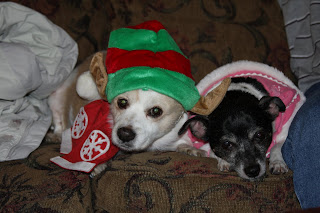 Posted by Bosch Family at 8:45 AM No comments: