When we bought our house several years ago we thought that it was a little odd that the previous owner had installed a ceiling fan in the kitchen.  We said that we were going to eventually take it down.  But it came in handy when we have tons of people over or when Chris is making big meals.  It really keeps the kitchen cool when you're baking or cooking a turkey for Thanksgiving.  We leave all of the ceiling fans running all day and night during the summer to keep the house cool.

Well on Saturday the ceiling fan in the kitchen finally burnt up.  The light still worked but the fan itself was dead and it started to smell.  So we headed down to our favorite neighborhood Home Depot to look for a new one.  I now know more than I ever wanted to know about ceiling fans!  We started off buying one that I really loved but it didn't produce enough air so we had to return it.  I found several that I wanted that either didn't provide enough air or enough light.  After several hours of looking we finally decided on one.  Let's hope that nothing else decides to break in the kitchen.  I've already had to replace the dishwasher this year! 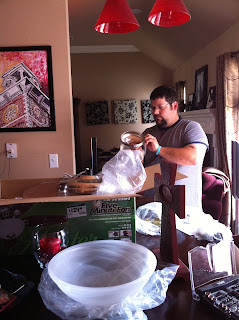