Thursday we got our first snow fall of the new year.  Unfortunately we were unable to play in the snow that day because I had to work and Chris was in Phoenix for work.  We only got a couple of inches of snow but it's always fun to play out in it.  We didn't get a chance to enjoy the snow until Friday.  Chris's flight didn't get back until 8:30 Thursday night and since the roads were bad he didn't get home until late.  When Chris left Phoenix it was 81 and sunny and when he landed in Northwest Arkansas it was in the teens with snow and ice on the ground!  Thankfully I was off Friday and Chris didn't have to go to work right away that morning.  So we got to play with the dogs out in the snow.  Morgan absolutely HATES the snow.  He runs out to go to the bathroom and runs right back in.  Baxter on the other hold LOVES the snow.  The last snow fall that we got last year was when he had his back surgery and he was unable to play in the snow.  But he took full opportunity to play on Friday.  He's favorite thing to do is eat the snow.  He wants to go outside every few minutes to play and eat snow.  I'm hoping that we don't get anymore snow for the rest of the year but I really don't care for snow or cold weather at all! 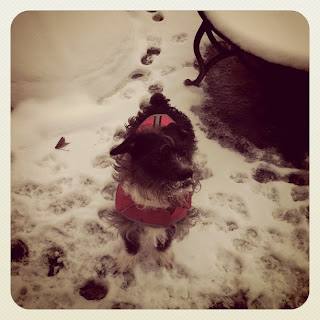