When we came back from Dallas I went to take Chris's car Bartholomew out for a drive with the dogs. Well, it was deader than a door nail. This isn't the first time that this has happened but our warranty ran out in June and we decided that we needed to start looking for a new one. Remember a few months ago when I traded in my SUV, Kenneth, to get a more fuel efficient car. At the time it sounded like a good idea but we didn't realize you can't put a sheet of plywood in a car and you can't haul big things in it. Chris has been wanting a truck for sometime know and I saw a commercial for Nissan saying if you bought one of these three cars they would give you a Nissan Verse for free!

We were curious about the commercial so we decided to go check it out. Well, the truck that Chris wanted wasn't part of the three cars advertised but we decided to test drive it anyways. The Nissan Frontier drove extremely rough and it actually made me car sick, and I don't get car sick. We told the salesman that we weren't interested and he recommended that we test drive the Nissan Xterra because it is mounted on a truck frame. We drove it and liked it but we know there was no way that they could come close to our current payments. The salesman came back with some numbers and of course the payments were more than we wanted to pay. So we told him that we wanted to go home and do some research and think about it. He was like well is there anything that I can do to send you home with this car. I told the guy that there was nothing he could do to change our minds and then he offered us a check for eight thousand dollars!! After talking with Chris and with much thought we decided to go ahead and buy the Xterra because we could pay off two of our high interest credits cards. If anyone is looking or wanting to purchase an SUV right now car dealerships are willing to basically give some of their vehicles away for free or give you cash to take them off their hands.

Here is a picture of the new SUV. Chris hasn't decided want he wants to name it but here are some of the ones that we have come up with so far: Madden, Jackson, and Rylie. I told him that it needed a rugged name because it was manlier. 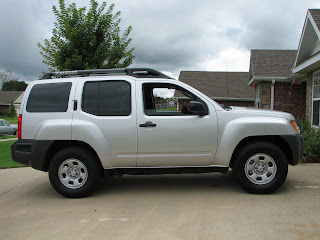