Morgan and the 3 beds

Newton has been with us for two weeks now and the dogs have finally adjusted to him.  I won't say that they get along completely yet because they still get into the occasional fight over toys and food.  I think that the biggest adjustment has been for Morgan because he doesn't stink up for himself.  We bought Morgan a new pillow for the living room but it seems like every time he looks up someone is sleeping in his bed!  We have several pillows in the house for the dogs to sleep on ranging from big to small.  It seems like Morgan never gets the big bed! 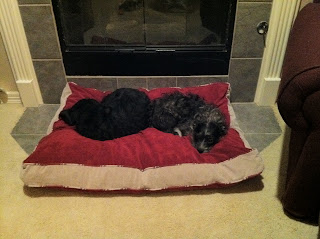 After Morgan tried sleeping in Baxter's baby bed we had to go get a new pillow for the smaller dogs to sleep on.  Hopefully now Morgan will have the big pillow to sleep on all to himself!  Baxter is starting to really like Newton because Newton likes to play with toys.  They play tug of war all day and it's just so cute to see!  It's nice to have someone else play with Baxter for a change because he would love with his toys all day long!! 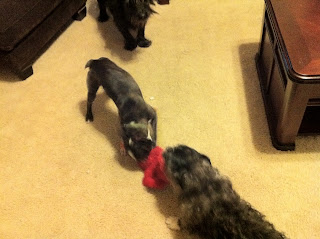