In two weeks is our 10 year wedding anniversary!  I can't believe how quickly 10 years has gone by!!  Chris decided to go ahead and give me my anniversary present early since he knew that it would take awhile for it to get done.  For years I have wanted to redo my wedding set but we could never really afford to do it.  When we got married we were broke college kids who could only afford simple gold bands.  I've always wanted a diamond anniversary band and at our 5 year anniversary I looked at them but decided to wait until our 10th.  Chris wanted to surprise me with one this year but he thought that it would probably be a good idea if he let me pick it out.  He didn't realize just how big a disaster this would turn into!!  I made him go jewelry shopping every day for a week until I finally decided on the ones that I wanted.  I wanted a anniversary band that would go with my engagement ring which the diamond is from Chris's great grandmother (or is it great great grandmother).  So I decided on getting one with a milgrain finish which has more of an antique look to it. But when I went to look at them it didn't look right with just one.  After talking with the the sales girl we decided that it would be pretty if I got two of the bands in white gold and then my wedding set would be two toned.  I just couldn't make myself buy it right then so I shopped around.  This was the ring that I looked at 5 years earlier and couldn't make Chris buy it then.  I'm a very frugal person and I just had a hard time spending that kind of money.  I had finally narrowed it down between two places one had a cheaper ring with bigger carats and the other one had the ring that I really loved.  I spent a hour and a half going back and forth between the two places.
In the end I just couldn't make myself love the cheaper one and it just didn't sparkle like the more expensive one.  I knew if I would have gone with the cheaper one I would have regretted it.  Chris was so nice during the whole thing the only thing he told me was to get the ones that I really wanted plus I think he was ready for it all to be over with!  I absolutely love how it all turned out.  I've gotten tons of compliments on it already and I wouldn't change anything about it.  I love you so much Chris and thank you so much for my anniversary present, you are absolutely the best!! 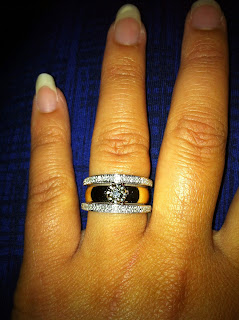 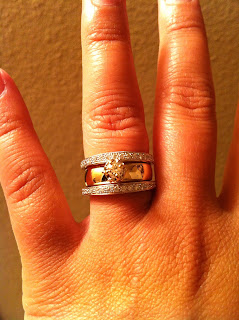 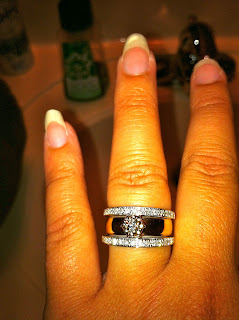 It's really hard to get a really good photo of how it looks.  It sparks so much in person!! I suppose if I was using a regular camera and not my iPhone I'd get a better photo!
Posted by Bosch Family at 7:00 AM